No products in the cart.

Anemia is a health condition where there is lower than normal red blood cell count. It is also caused when the red blood cells do not have enough hemoglobin. This is a very common condition and is prevalent in all across the globe. Those who have anemia lacks oxygen-rich blood, and if not treated timely can lead to serious complications. 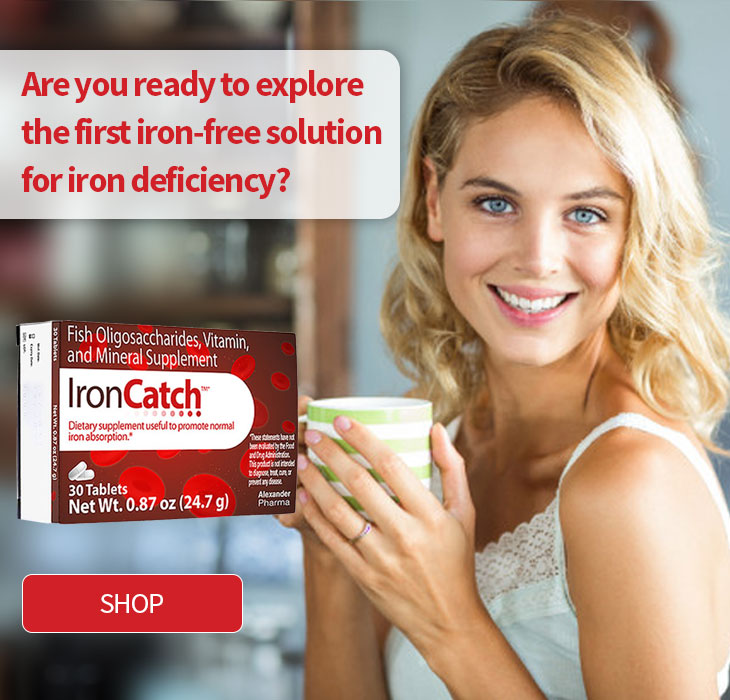 If a person is anemic for a long time (chronic anemia), the body may adjust to low oxygen levels. The individual may not feel any significant difference in the body condition until it becomes severe. However, for those suffering from acute anemia (anemia occurs rapidly), the person may experience the above stated symptoms.

What is iron deficiency anemia?

Iron deficiency is one of the most common causes of anemia. This is because iron is a major component of hemoglobin and helps maintaining the proper functionalities of the system. Conditions leading to chronic blood loss are also one of the many causes that depletes the iron store in the body. IronCatch is one of the top choices as an iron supplement to replenish the lost iron. It is a well accepted solution to solve iron deficiency anemia.

Women of 12-55 are likely to have low-grade iron deficiency anemia because of normal menstruation. This is generally without any major symptoms as the blood loss is much small and temporary. But for those who have severe blood flow might need a regulated dose of the iron supplement to compensate the blood loss.

Different conditions that lead to anemia

Another common reason for iron deficiency anemia might be from colon cancer or from stomach ulcers that results in recurring bleeding. Often, stomach ulcer bleeding is induced by medications, even from the common over-the-counter drugs such as aspirin and ibuprofen. Chronic oozing from these ulcers results in loss of iron.

Which is a chronic inflammatory bowel disease (IBD) resulting inflammation in the gastrointestinal (GI) tract can also be a leading cause of anemia. If you suffer from symptoms such as cramping, diarrhea, and constipation, you might be asked to take a complete blood count test (CBC). People with Crohn’s disease tend to suffer from malnutrition and can develop anemia from blood loss caused by intestinal ulcers.

The condition has symptoms such as weakness, fatigue, pale skin, headache and dizziness.

Treatment of IBD-associated anemia has seen a huge development is the past decade. When the conditions worsen with ibd anemia, the novel intravenous iron preparations have been seen to be a safe treatment option. But for the acute condition, iron supplements such as Iron Catch deems perfectly fit.

The term inflammatory bowel disease (IBD) refers to a group of intestinal disorders. In all these conditions, one of the primary symptoms is the inflammation. Often, it is thought as an autoimmune disease, but research suggests that this chronic inflammation might be because of the immune system attacking a harmless virus, bacteria, or food in the gut.

Ulcerative colitis and Crohn’s disease are the two most common types of IBD are. Ulcerative colitis is generally limited to the colon or large intestine however in Crohn’s disease, any part of the gastrointestinal tract (starting from the mouth to the anus) might be affected. Although, it has been seen to generally affect the last part of the small intestine or the colon or sometimes, both.

There is no known cause of IBD. The harmful bacteria, viruses, antigens can sometime triggers the body’s immune system and develop an inflammation in the intestinal tract. Recent studies have also found some interesting combination of hereditary, genetic, as well as environmental factors that can affect the intestinal health. Sometimes, the body’s own tissue can create an autoimmune response. Irrespective of the cause, the reaction without control and proper diagnosis can lead to damaging the intestinal wall.

Similar to any chronic diseases, a person with IBD will have phases where the disease flares up and causes symptoms, and times when there is complete good health without any signs or pain. The symptoms might range from mild to severe and include-

Rheumatoid arthritis (RA) is a systemic autoimmune disease and it mainly affects the joints in the body. It often results in swelling, stiffness, and pain in the limb joints. With the misfiring of the body’s immune system, it may cause inflammation and damage to other organs such as the heart, lungs, and blood vessels. People with inflammatory arthritis, taking nonsteroidal anti-inflammatory drugs (NSAIDs) can suffer from ulcers or gastritis, which cause gastrointestinal bleeding, and in turn, rheumatoid arthritis anemia.

Anemia can be seen in people with ongoing inflammation in their body, and rheumatoid arthritis anemia along with inflammatory bowel diseases such as ulcerative colitis and Crohn’s disease are common. Treatment for any of the above listed form of anemia usually involves changing your diet and taking iron supplements. Iron Catch is 100% natural and safe iron supplement that can be consumed by patients of all gender and age. Proper diagnosis and diet can help control the iron loss significantly.

Celiac disease is one of the most serious autoimmune diseases that is found in genetically predisposed people who suffers from the ingestion of gluten. As a result, the small intestine is damaged. It is estimated to affect 1 in 100 people all across the globe. When left undiagnosed, they remain at the risk for long-term health complications.

When people with celiac disease eat gluten (which is a protein present in rye, wheat, and barley), their body triggers an immune response which affects the small intestine. These attacks create a severe damage on the villi, which are small fingerlike projections in the organ responsible for promoting nutrient absorption. With the damage in the villi, there is mal-absorption of nutrients into the body.

Celiac disease is hereditary; this means the first-degree relative with celiac disease (parent, child, sibling) are susceptible to having a 1 in 10 risk of developing celiac disease. And, when left untreated, celiac disease can lead to additional serious health problems.

Someone with celiac disease if accidentally eat something with gluten in it, he/she might face the following complications –

Although there is no definite cause found for celiac disease, people with genetic link-ups are more prone to the condition. Stressful medical events like a surgery or viral infection can also trigger it sometimes.

Want to know more about IronCatch? Find out about the new developments, latest offers and other related information about the iron supplement. Sign up now.
Copyright © 2020 IronCatch.  All Rights Reserved.  Powered by Top IT Marketing
Privacy Policy          |          Terms and Conditions          |         Return Policy